The cycling race in Olympics 1992, in Barcelona

The cycling race in Olympics 1992, in Barcelona 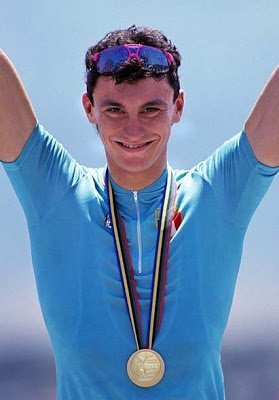 Such a great success, the Olympics 1992 were! Still recently we were celebrating the 25th anniversary of those magical Games. The cycling road race in Olympics in Barcelona 1992 took place in Sant Sadurní d’Anoia (Penedes).

All the cycling track competitions were held at the Velodrome d’Horta, inaugurated for the event.

But the road races were not in Barcelona city, but in Penedes, the wine region (the Catalan Tuscany) south Barcelona. The cycling race in the Olympics 1992 took place around Sant Sadurní d’Anoia (capital of the Catalan Cava sparkling wine). The route was not very demanding, then it was a good race for the “rouleurs”  rather than the sprinters or the climbers.

In those days, the professional cyclists could not participate in the Olympics (it was just from the next Games in Atalanta-USA that the pros could participate).

The winner of the cycling road race was Fabio Casartelli, the Italian cyclist who died shortly after (1995) in the Tour de France. In 1995 he was riding for the Motorola American team, and crashed in the steep descent of Portet d’Aspet. By those times, the helmet was not mandatory.

After Casartelli, the dutch Erik Dekker and the Latvian Dainis Ozols completed the podium. Such a great race it was, and such a pity the fate of this young cyclist!